When Jordan King-Lacroix went shopping with his girlfriend for Star Wars apparel at UNIQLO, he was staggered to find archaic sexist marketing in place.

Oh man, Disney. Life is hard, isn’t it? Between single-handedly making Marvel the biggest powerhouse moneymaking movie series of the century and sweeping in to save the Star Wars cinematic universe, it must be hard to find a break. Counting all your cash must really be eating into your time. And your common sense.

Imagine my surprise yesterday when I was shopping at the UNIQLO in downtown Sydney to find some pretty amazing fan-designed Star Wars T-shirts. I got a couple, but when I read the attached label explaining that these were fan designs, the winners of which were selected by UNIQLO and Lucasfilm, the label said something … off.

Here it is; let’s see if you can spot it: 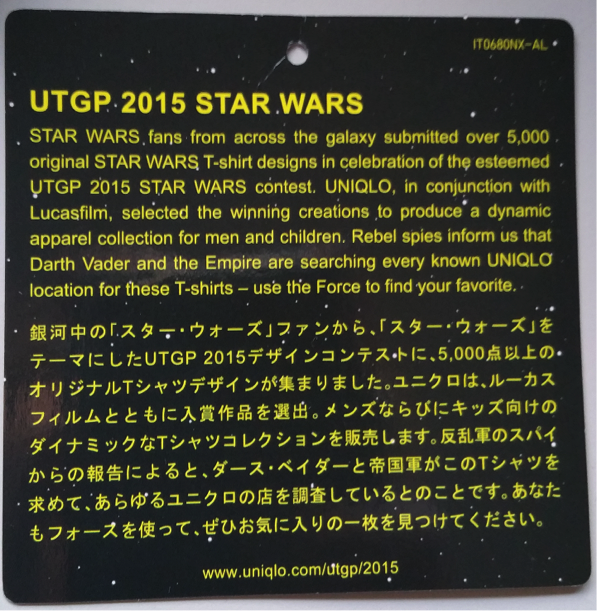 Can’t see it? Let me show you again.

So, why was this decision made? It baffles me. How hard would it have been to print the exact same prints on women’s T-shirts and be done with it? Is there a reason for the exclusive marketing? Did you watch this video about what not to say to a female Star Wars fan and come away with some misinterpretation of the message?

Even if the place is all run by misogynists who assume that women don’t like sci-fi and that it isn’t worth pandering to this tiny market—which is a load of horseshit, by the way—why would you restrict your market like that? It makes no sense even from a soulless monetary aspect. Did you know that women still make up the majority of moviegoers? And that they prefer female superheroes? And guess what Star Wars had? Some pretty wicked female characters—namely, Captain Phasma and, oh yeah, Rey (a.k.a., one of the goddamn lead characters).

Hey, guess what? Did you know that adult women are now the official majority demographic of gamers? Uh, YEP! Do you know what those people would like? To not be excluded because you think their vaginas make them incapable of enjoying science fiction.

Now, #WheresRey? And Captain Phasma? The Force Awakens toys are missing some pretty notable characters—e.g., a lead character and a good supporting character. Instead of those two women, you put in Generic Stormtrooper 1 and 2? What the hell were you thinking? Why did you bother doing this? What exactly did women do to earn your ire so badly?

The films have made record-breaking amounts of money. The Force Awakens is definitive proof that people will pay for—and love—sci-fi films with female leads. You worked hard to make all these characters great, and we all look forward to more of them in the future.

I just don’t know what else to say, except, may the force be with us—because, it doesn’t seem to be with you.