Missed the political subtleties of Super Tuesday? Well, you won’t find it here. We have who won, where, and by how much. Plus insanity.

To sum it up tritely, #SuperTuesday was a no contest. It was Trump and Clinton and Clinton and Trump. It was like spending Christmas Day at a distant relative’s house. Boring as you assumed it would be, with a pang of late excitement. While Uncle Donald and Auntie Hillary fought over the roast, Pop-Pop Bernie cracked the sherry and made a last-ditch lunge for the kitchen. 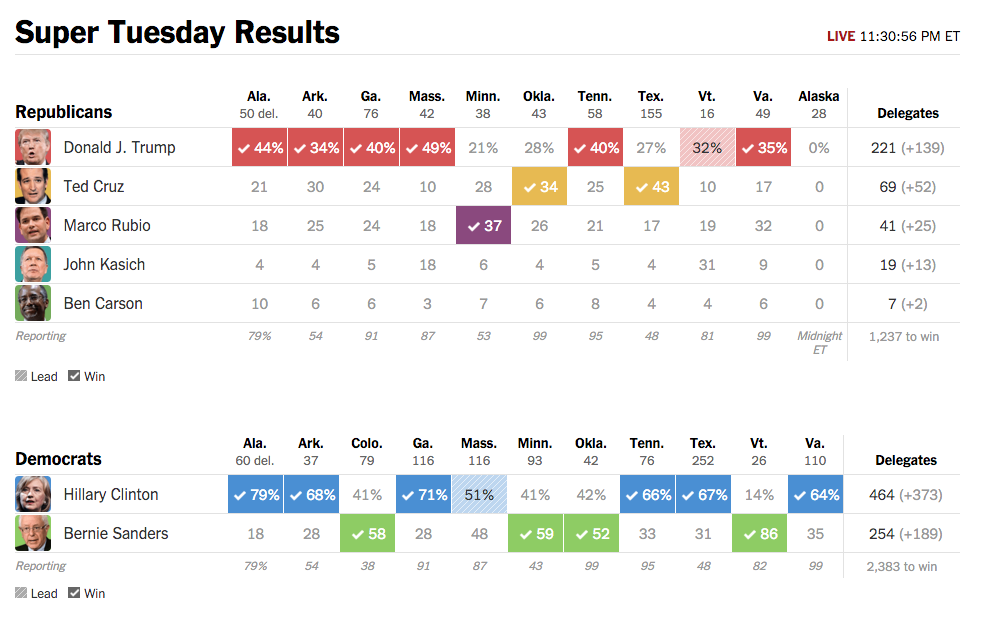 Prior to the Kraken descending upon the GOP, there were vast murmurings of a Trumpian reverse. Yeah, nah. From the first steps out of the gate, Trump was doing Trump things, rolling everyone in the GOP. Save for Marco Rubio’s last-minute cameo (more on that below), it was curtains prior to the first number.

On the other side of the fence, it was all Hillary. Her early performances in the Southern states were accurately summed thusly:

Clinton’s victories in Southern states so far can only be described as a wipeout pic.twitter.com/EY57N9pU7q

As Clinton ruthlessly hung ten on the crest of her wave, we were blinded to the possibilities of anything different. I thought the encroaching wipeout for Bernie would be total (see: Whyalla). Cue the Bern’s last-second charge in Minnesota, Massachusetts, and Colorado. With 288 delegates left on the table, it was game on. Heeeerrreeeeee’s Bernie.

He snagged Colorado and Minnesota before Hillary bit back, snagging Massachusetts (50% to 48%), making it a digestant after her Southern five-course banquet.

So, fair reader, if your head is shaking at this point and you’re wondering, “Why Trump?” Well …

If that Tweet graph doesn’t sate you for an explanation and you’re claiming conspiracy—here’s an alternate theory:

In a day of delusional rants, the delusional rant of the day goes to Marco Rubio, for even in the face of such desolation, he still believes he’s winning, à la a gunshot Denzel Washington in Training Day.

In conclusion, the race just got simpler and a whole lot harder. If Trump ’16 wasn’t already legitimized, it is now. Basking in the results, Trump claims that he will now unite the GOP behind him as the GOP scrambles to unite behind Cruz.

Also, is it just me, or did those late wins for Bernie Sanders do wonders for his complexion?