Being sledged by Reddit may be like being mocked by a four-year-old, but that hasn’t stopped us so far. This week, we have vegetarians and Taylor Swift in the cross hairs.

T-Swizzle’s Grammy speech directed at Yeezus, a.k.a. Kanye DoucheBag West, has gone more viral than polio and her backstage photo has taken Reddit by storm. One Reddit user has truly served us twisted-minded people and started a Photoshop battle where any Reddit user is invited to take the chosen image and Photoshop it into gold!

I don’t need to even explain why the following images will end stress, get your heart racing, and leave you sighing with relief. They just will.

All of which is but a mere entree for the organized brilliance in this list.

Being a vegetarian is the correct moral standpoint, but it’s a damn hard conviction to stick to. So, props to all of you who can. I was once a vegetarian for three days and it was the most difficult time I’ve endured, I can only look back with pain in my heart. I honestly feel bad for those who can’t eat meat for medical reasons. Know that I pray for you all at night. I didn’t become a veggo because I believe in saving all of the world’s animals; it was because going veg was the “in” thing to do at my school. If you ate meat, you were considered an outdated nerd. Like the majority of my grade, I too came under peer pressure, lost three kilos, and voided all my energy. But it did not win! After the few days of eating lettuce leaves and tofu, I overcame that bullshit and ate the equivalent of an entire cow. FYI, I love animals, all of them, but I don’t get why people have a problem eating veal! I mean, murder is murder, yo!

Just because it looks cuter don’t mean that justifies killing the older, fatter, and juicier one.

Anyway, these next few images have been made to poke fun at the veggos of our world. Enjoy! 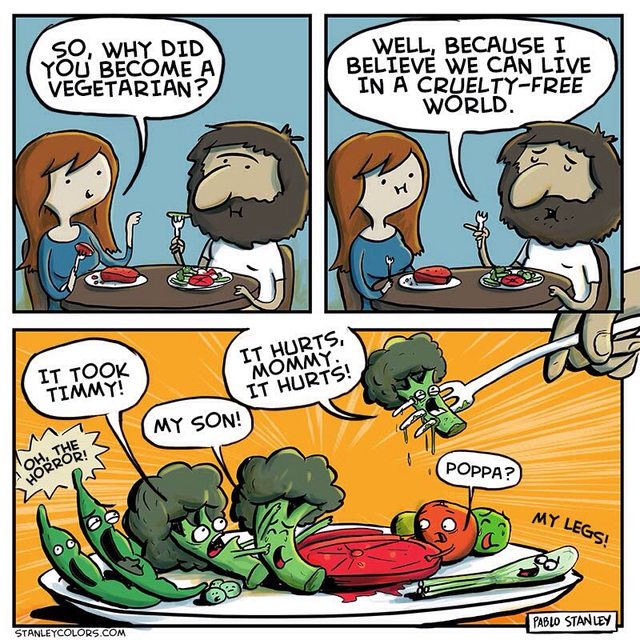 Serial embarrassment. It’s a bastard of a pickle. Does this keep happening to you, but you’re still unsure how to handle it after the A(wkward)-Bomb drops? This guy has the answer to all your problems. If you need to hide, just use your hands in front of your face like a shield! Wow, it’s so simple and costs you nothing! Yes, everybody will still be there when you lower your hands and open your eyes, but maybe if you keep your hands up there indefinitely, everybody will get bored and walk away. So it’s win-win.

He Forgot The Microphone Was On…

Also, finally, this cat. Not for its admiration of the bannister thingo, but the strange googly eyes that look over both your shoulders. WHO ARE YOU LOOKING AT, CAT?