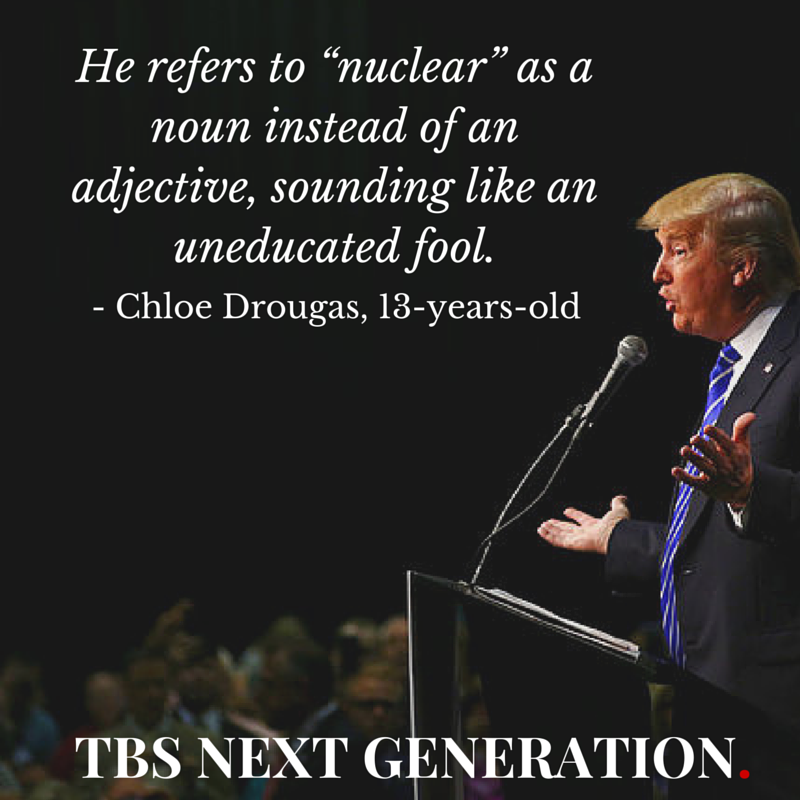 Mr. Trump is visiting our conversations, the news, and other media frequently and the reason is obvious. He is causing constant controversy and we just can’t help talking and gossiping about him.

I’m even slightly appalled at myself for adding a shout to the Donald Trump roar.

Every time he speaks a fire ignites in us that forces us to speak.

There are those who feel empowered by his bravery to say “what everyone else is thinking.” Although, I personally haven’t met anyone who thinks that way here in Australia—they must be in America (because someone is voting for him). There are also some people who are shocked that he says these horrible things out loud and he still gains supporters.

He certainly knows what he is doing, he does have support and he does attract attention and, like it or not, he does have everyone talking about him. I’m astounded at his bravado and confidence and I can’t believe this is not all a big joke.

He has been getting attention for being racist, misogynistic, and sexist, calling women he doesn’t like “fat pigs” and saying horrible things like, “A person who is very flat chested is hard to be a 10” and “Women, you have to treat them like shit.” Mexicans are apparently all drug dealers and rapists in Donald’s eyes, he says that Mexico is “bringing drugs, crime, and rapists” to the United States and that he would “build a great, Great Wall on our southern border” and “I will have Mexico pay for that wall!” He also proclaimed that in two years he would exile all 11 million illegal immigrants.

Well, isn’t that nice? I honestly don’t know how this spoiled (he was given a “small loan of one million dollars” by his father), arrogant, and unfair man wins any votes. Women, after hearing his rude and unjust sexist comments, are still voting for him and I don’t know how. It’s a joke that he is even campaigning for president.

Oh, and if he wins, America is definitely going to be embarking on a roller coaster downhill. I don’t believe Mr. Trump’s presidency will have a positive effect on the rest of the world. When asked about nuclear weaponry, Mr. Trump didn’t have a clue about what he was being asked or what he was talking about. He didn’t answer the question and didn’t even use the correct terminology that even a 13-year-old would know. He refers to “nuclear” as a noun instead of an adjective, sounding like an uneducated fool. If he can’t tackle this important issue fittingly, I think he will just be a humiliation on behalf of the Western world and allow other heads of state to lead in world politics because no one will respect America.

I can’t imagine Donald Trump having any diplomacy in discussions with other presidents or prime ministers of the world. I cringe at the embarrassment I would feel hearing about him offending others through his ignorance.

He claims he wants to make America great again, but we are all afraid he is just going to make it worse. He has all these awful personality traits and he will be representing America if he wins. America, the power country we all look up to, to represent the strength of the Western world. What we are trying to achieve in our world today is freedom of speech and choice, peace, equality among all sexes, races, and religions. But with Trump, can we achieve it?

Lately, he has been proudly harping about being “pro-life.” The phrase itself has positive connotation—of course we are all for life!—but don’t we need the freedom of choice, which is a part of our freedom of speech and the society we strive to have? Will Americans truly be free under a Trump Presidency?

So why are we all talking about Donald Trump? Isn’t it obvious? Donald Trump, rude and ridiculous, he is a perfect example of what a president should not be.

This article is part of a series for The Big Smoke Next Gen in Australia.

The Big Smoke Next Gen is a program which matches professional and experienced writers, academics, and journalists with students who wish to write non-fiction articles and voice their opinions on what is shaping the nation.

For more information about our program at The Big Smoke, or to become a mentor, please contact us. The Big Smoke America will be launching its own Next Gen series later this year.