What does the next generation think of today’s issues? In our TBS Next Gen program, we publish content by Australian students currently being mentored by TBS writers in an endeavor to find out. Alisha, 9, unpacks climate change!

I don’t want to (and I am sure you don’t want to either) live in a dying world with people, animals, and plants becoming extinct, disastrous floods killing millions of innocent creatures and humans, terrible droughts wiping life off Earth, and, to top it off, Earth dead mainly because of us!

Climate change plays a massive role on our planet. But what does it do that is that huge? Before we get started, “What is climate change?” Well, the word “climate” describes the conditions of temperature, humidity, and rainfall over an entire region, and “change” means how something is becoming different. So together the term “climate change” defines how the climate is changing, and unfortunately, our world is becoming warmer. 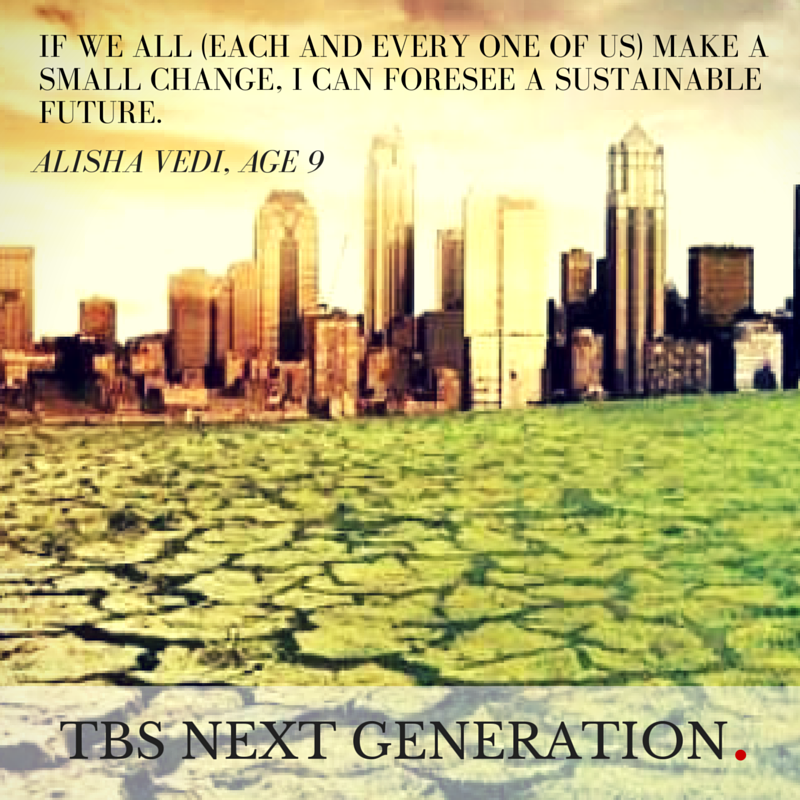 I have put together a list of FAQs (frequently asked questions) about climate change to answer some of your questions.

Why is climate change happening?

When you go inside a greenhouse, it is warmer inside than outside. This is because the structure retains the heat. The Earth’s atmosphere is very similar. So when we burn liquids like oils and chemicals, it turns into gas. Since the gas is warm, it rises to the sky. The Earth’s atmosphere retains the heat and so the earth gets warmer. A very common gas is carbon dioxide.

What are the top 5 reasons for climate change?

1. The first main reason for climate change is burning fossil fuels (matter from prehistoric time which has been through a lot of heat, time, and pressure). People burn fossil fuels to make electricity and to power our machines and to fuel all kinds of transport.
2. Deforestation is also another cause of climate change. Trees and plants take in carbon dioxide from microscopic holes in their trunks, stems, and branches, and breathe out oxygen. When trees are cut down, there is less oxygen and more carbon dioxide in the air.
3. The third reason for climate change is methane emissions from animals like cows, sheep, pigs, horses and other types of cattle, and humans. This reason may not appear in the future, as scientists claim they have a solution for it by adding a herb to livestock feed.
4. Chemical fertilizers with nitrogen in them are also a problem. The fertilizers might not be absorbed quickly enough into the plants. This means they can evaporate into the air. Also, the Arctic’s ice traps nitrogen underneath it. When it melts, the nitrogen is released into the atmosphere. Nitrogen is also known to capture heat.
5. The fifth reason is mining. When mining takes place, gases from underground are released into the environment. These gases rise to the sky and stay there.

What are the negative impacts of climate change?

The impact really depends on what part of the world you are in. Some parts of the world, like small islands on the equator, will suffer severe floods. However, places like Africa will suffer droughts (and Africa already is). Being an Australian, I am already seeing the impact of climate change on our magnificent Great Barrier Reef. Due to the increasing temperature of the surrounding sea water, the coral is “bleaching”—losing its color and beauty. Small islands like The Maldives are already sinking. It just goes to show that climate change is deadly!

How do we assure a sustainable future?

It is all about teamwork. We need to work as a team to save electricity so we don’t burn large amounts of fossil fuels. Use less transport (carpooling), use public transport (if you are not a public transport person—walk! It is good for you and the environment). Plant trees and bushes in empty spaces like ovals, parks, and empty pots. If we all (each and every one of us) make a small change, I can foresee a sustainable future.

We need to do something. We all can save Earth. It is our only true home.

This article is part of a series for The Big Smoke Next Gen in Australia.

The Big Smoke Next Gen is a program which matches professional and experienced writers, academics, and journalists with students who wish to write non-fiction articles and voice their opinions on what is shaping the nation.

For more information about our program at The Big Smoke, or to become a mentor, please contact us. The Big Smoke America will be launching its own Next Gen series later this year.