Being out of bed sucks. What happened today? Well, Kanye teamed up with IKEA, Obama asked Republicans to not back Trump, and the UN is looking into Australian prisoner abuse.

United Nations Looking into Treatment of Intellectually-Impaired Prisoner in Australia

The United Nations Human Rights Council has been asked to investigate the treatment of Malcolm Morton, an intellectually-disabled prisoner who was repeatedly restrained on numerous occasions at the Alice Springs Correctional Facility in Australia.

Morton was born with severe intellectual impairments and also has been diagnosed with autism spectrum disorder and epilepsy. In the remote central Australian community of Santa Teresa, Mr. Morton fatally stabbed his uncle Simon Wallace in 2007. He has been imprisoned ever since.

In response to the claims brought forward by Mr. Morton’s guardian, the UN is said to be “deeply shocked” and according to Professor Keyser who drafted the UN complaint: “The UN High Commissioner for Human Rights has been extremely concerned about the revelations from the Don Dale Youth Detention Centre, and we anticipate the UN will also be very concerned about the revelation that restraint chairs are used in other parts of the corrections system in the NT, particularly in relation to vulnerable prisoners.”

Kanye Looking to Collab with IKEA, IKEA Open to Being Made “faamhus”

If Sundays marching around the yellowing prison named IKEA weren’t already grating, Kanye West is set to be added to that equation. Yes, Yeezus has descended on the Scandinavian furniture wizards, on his day off, no less.

Kanye West released this statement to BBC Radio 1 in which I’m unsure if he’s talking in the third person or walking in the shoes of someone else: “Yo Ikea, allow Kanye to create, allow him to make this thing because you know what, I want a bed that he makes, I want a chair that he makes.”

The artist still known as Yeezus later released some images of his concept furniture via Twitter:

I’ve been trying to figure out the bed design for the master bedroom at our Hidden Hills compound… pic.twitter.com/aEPqoBGY4b

In a rather brilliant response, IKEA released this image online, a tongue-in-cheek prototype of an oversized bed named the “Yeezy,” in reference to the one witnessed in the video to his track “Famous.”

Dear Yeezus, I don’t ask for much, for I am your humble servant, but please do this. Thanks, and amen. 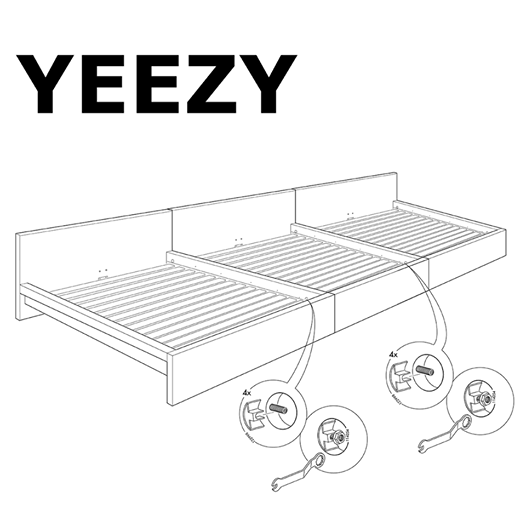 Barack Pops on His Big Boy Strides, Resorts to Name-Calling

On the fair land of eagle wings and bear arms, it’s all gone not particularly well. Barack Obama has again questioned the suitability of Donald Trump to fill the oval office, which is nothing new, and perhaps best summed up by Barack’s trite wordsmithery of “enough.”

Turning his velvety ire toward the Republican party, he called for Trump’s removal as the candidate, stating that while he saw differences with previous Republican presidents, he never saw them unfit to govern.

However, this pointed criticism brings on an apathetic shrug. Obama seems to be criticizing mom’s new boyfriend, as we awkwardly sit in the middle, agreeing with outgoing dad Barack, but also silently thinking that its time for her to try someone new.