David Cameron quit (again), Daniel Radcliffe may be Potter once more, and a record number of people decided not to pay for Narcos.

Well, the last member of that crazy booze-painted “we-really-did-that?” sorority bash known as the Brexit has finally gone home, with David Cameron picking up his car keys and leaving without saying goodbye, before standing in the doorway, awkwardly rambling as we try desperately to break off conversation with him. Cameron later claimed that he quit, as to not be a “distraction” for the new PM of Blighty, Theresa May. A comment that has crossed the Atlantic, and then the Pacific, to reach Australia to raise the eyebrows of the cynical Left, pointing their fingers at an old foe. You know the one. Rhymes with Sony Tablet.

However, Cameron quitting (again) has ruffled less feathers in the new UK as another crisis has hogged the limelight and strangled opinion:

Bake Off will be moving to ITV: Twitter in meltdown, this is the end of the world

Daniel Radcliffe Refuses to Rule out Returning to Hogwarts, Claims That Script Chooses the Wizard

To another Brit who is dragging out his retirement, Daniel Radcliffe said in reference to a return to the Potterverse: “I’m never going to close the door; that would be a stupid thing to do.” He was pressed to answer the question in regards to The Cursed Child, the Potter thing that definitely wasn’t going to be a book, but a play—and definitely not a movie (which Warner Bros. is looking to turn into a trilogy of its own). In the same interview, Radcliffe also said that he’d be fine if someone else picked up the wand of Potter. Jump cut to Ollivander losing his shit.

Incidentally, one of Radcliffe’s gripes would be that he is too young to be the old Potter in The Cursed Child, so, with that in mind, may we offer a much-loved-bespeckled British substitute?

In a move that will surely goose the producers of Narcos to travel to the doors of those who decided not to pay for the privilege, offering them Plomo O Plomo, the figures of the illegal downloading of the series of drug kingpin Pablo Escobar will twist the love handles of the great man. 6.4 million is the number, denoting the amount of downloads beyond the comfy, judgy confines of Netflix. As a measure, 2.3 million watched the show legally. 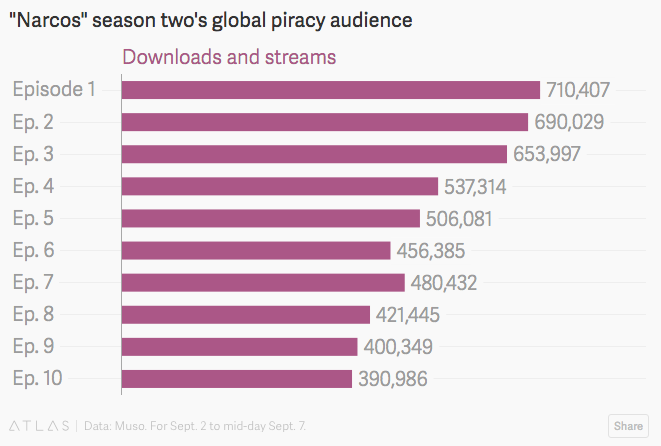 However, Narcos has to mule a much larger product if it wants to clip Game of Thrones, which has been anointed “Most downloaded show in the world,” which for some reason is the new high-watermark for television production. To be honest, no one really cares about the Emmys, except if you’ve been nominated, so I vote we scrap it in favor of a winner deemed worthy by the numbers of people willing to not pay for it.

Incidentally, I’m a fan of Narcos, but every time I think about it, I cannot unsee this:

Wading into the Pandemic: Constantly Overreacting or Underreacting