Two friends, two separate responses from the public. Kanye West is fighting the same demons as Kid Cudi, so why do we not care as much?

The first time I crossed paths with Kid Cudi was on the outer rim of some YouTube binge; by ways of a suggestion, Pursuit of Happiness filled the surrounds of the garage we sat in, and I heard it immediately: a deeply troubled man crying out for help, drowning himself in bars, musical and otherwise.

A friend quickly sidled up and asked, “Why aren’t you playing the Aoki remix?” which is the strange thing about cries for help—not everyone has the same reaction to them.

Soon thereafter, Kid Cudi earnestly charted his woe via tweet, and checked himself in for treatment. Read the tweet; his honest appraisal of a man torn against himself is harsh, yet heartening, and the collective reaction it roused was that of a large warm hug. He was simultaneously praised for reducing the stigma of mental illness, while we all wished him well. We’re here for you, babe. Be strong, etc.

However, the same could not be said for his close friend Kanye West, who recently entered hospital for his own similar mental health issues.

As is now gospel, Kanye turned up to his concert in Sacramento, decided on a rant instead of a retelling of the life of Pablo, and then left. 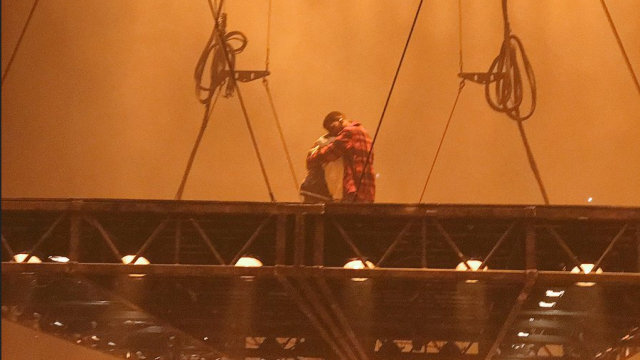 Hating Kanye is du rigueur, and for his detractors he makes that very easy—be it his IKEA furniture designs, his desire to run for President, or the way that Kanye lives his days. But the bigger issue here is the thousandfold articles about his mental health woes which start with the prefix, “It’s a serious issue, and we should not joke about it,” before making jokes about it, as the comment boxes are filled with the worst of apathetic detritus.

So, where’s the love for Kanye?

Cudi openly discussed his problems through music that we could dance to, and one day checked himself in and let us know that he was okay. We could accept that. He told us about it, he helped himself; the only traces of his mental health problems lie in beauty that he created for us.

Kanye, much like his rise of Yeezus, acted out what was plaguing him. His problems lie not in art, but rather the ugliness of our everyday lives. The public sees a lack of nobility in Kanye, be it his rants, his left-field tweets, or in particular his 2016 MTV speech where he zapped from self-promotion to bare honesty, daring to show the cracks, as perhaps he absolutely wanted to, before covering them with further self-promotion to protect himself—he made us watch both sides of his genius: the brand and the damaged man who created it.

Perhaps, like our response to Kanye at the MTV awards, we recoiled at the truth that he is actually troubled, instead seeking out the easier route of pulling apart his empty self-serving truisms, ignoring the possibilities of help, or indeed our responsibility to the hated Kanye that we did and still do so much to engender.

We are all edges and shades of grey, and we are all more than what we show, and we all deserve help.

Suffice to say, love to Kanye, get well soon.