The Democratic Party is on the political ropes. They’ve lost Congress, most state legislatures, and the White House. This weekend’s vote for DNC chair may foretell the midterm elections, the 2020 Presidential election, and beyond.

One of the most important political stories isn’t getting much traction at the moment. Given the way Donald Trump dominates every square inch of mental, media, and moral outrage real estate, it’s no surprise. We should be forgiven for believing the U.S. president is mere months away from impeachment, that the Republican Party is about to cleave in two, and that there is an energized resurgence of progressive liberal politics in America (testified by the swell of human protest routinely spilling onto the streets). However, believing these narratives is wishful thinking and leaves oneself exposed to yet another political whiplash.

The real drama unfolding in America right now is all about the Democratic Party—and their Waterloo is this weekend. On Saturday, late in the afternoon, the Democratic National Committee will vote for its next chairperson. Without conceding to hyperbole, the victor will spell either the blossoming of a revitalized Democratic Party or its inevitable demise.

One of the unspoken truths of the 2016 Presidential election is that the Democrats lost because they were unable to unite the progressive wing behind their chosen nominee. Many progressives felt bitter after their champion appeared to be unfairly denied a competitive chance in the primaries. The truth of this proposition aside, the sentiment was real and remains to this day. Try as he might, Bernie Sanders was not able to entreat enough of his supporters to fall in line last November. Some voted for Jill Stein, some wrote Bernie in, some voted for Trump, many just stayed at home. The net result? Trump won and created a political fissure—Corporate Democrats versus The Progressives—that has scarred the Democratic Party ever since.

The DNC is faced with a case of déjà vu. Do they pick the establishment figure or the progressive figure? Hillary versus Bernie all over again. Do they simply not accept that there were any lessons to be learned?

Given the level of liberal political energy expressed with democratic verve throughout America and across the globe, at the Women’s March, “A Day Without Immigrants”, airport protests, “Not Our President’s Day,” and many more, it seems unbelievable that there should be anything plaguing the Democratic Party. Indeed, Trump’s approval numbers are at an historic low and the Russia scandal just won’t go away. Given this background, the following information is undeniably surprising: 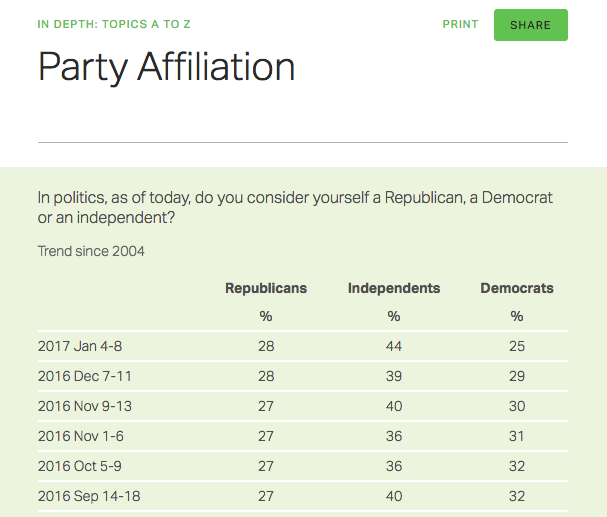 The number of Americans that self-identify as belonging to the Democratic Party is at its lowest level in over 12 years—which incidentally is as far back as the data set goes. Since the Republican number has remained the same, the conclusion is that voters are dropping their Democratic affiliation in favor of political “independence.” This is horrendous news for the Democrats, though few appear to be paying it due attention.

So what can be teased out of this knotted ball of Liberal/Democratic threads? At its heart, the story is about an anti-Trump inspired progressive impulse that is without a home and has outpaced the traditional institutional structure of the Democratic Party. Consequently, if the Democrats don’t reform and make room for this dynamic and insurgent political movement, they’ll miss a golden opportunity and, in so doing, inflict irreparable damage on their political brand.

We can now return to this weekend’s vote. Without putting too fine a point on it: if Keith Ellison (a progressive candidate endorsed by Bernie Sanders) wins, the Democratic Party will find a way out of the wilderness. If Tom Perez (the establishment figure) wins, they will be scattered to the political winds.

On Thursday evening, CNN aired a live debate between the eight candidates for chairperson. It didn’t auger well. As the candidates were introduced, the room—packed with establishment lobbyists—cheered loudly for Tom Perez but were disrespectfully silent for Keith Ellison. Liberal-leaning website, Heavy, ran a post-debate poll. The popular winner wasn’t even a close affair. The people want Ellison and soundly reject Perez. 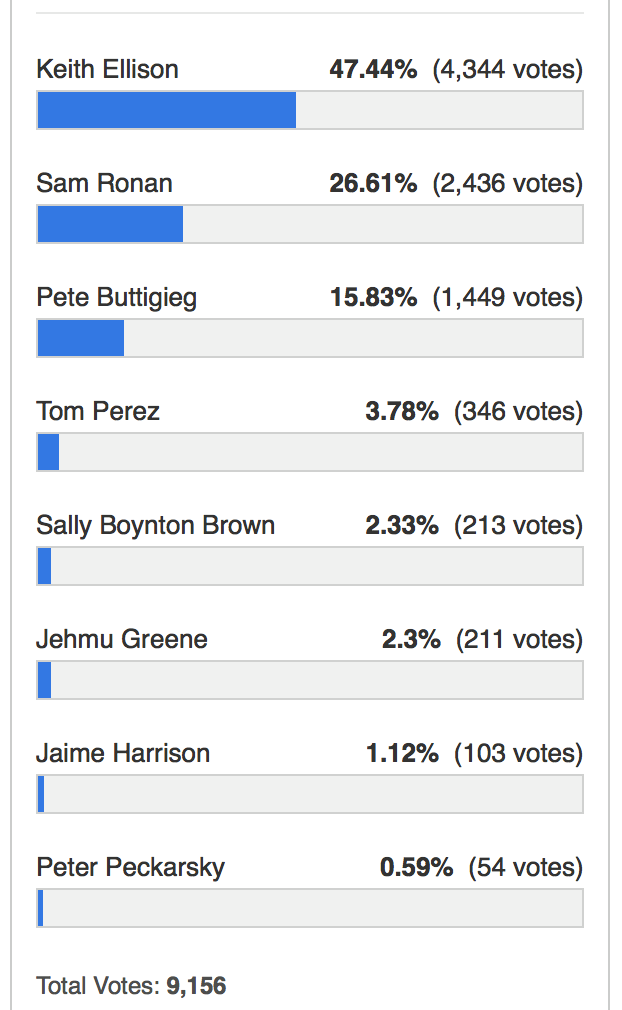 The Democratic National Committee is faced with a case of 2016 Primary déjà vu. Do they pick the establishment figure or the progressive figure? The figure that has the corporate donor money behind him or he who has the people? It’s Hillary versus Bernie all over again—substitute the persons of Hillary for Perez and Bernie for Ellison.

Can the Democratic Party really ignore the lessons of so recent a history? Or do they simply not accept that there were any lessons to be learned?

Crucially, there is no time to correct what would be a terrific mistake. The 2018 midterms are only 18 months away. If the Democratic Party cannot bring the progressive wing into the fold and harness the passion on the street, they run the risk of handing the Republicans a 60-seat majority in the Senate. This means the GOP could pass any legislation they want and there is simply nothing the Democrats could do about it. Despite the term “existential crisis” being much overused this cycle, now seems as good a time as any to trot it out again.

To push the prognostication further: if the Democrats don’t vote Ellison in, expect a two-Party system torn asunder. A fledgling third party, The Progressives, was launched this month. The passionate desire for genuine social and economic reform in America won’t dissipate. Even though it will find no landing spot with Trump’s GOP and none with establishment Democrats, it isn’t going to go away. The progressive movement could well adhere to this new Progressive Party and in time become a meaningful player on the U.S. political landscape.

In the meantime, enough votes will be drained away from Democrats to ensure a resounding victory for Trump in 2020. Surely this isn’t what the liberals in America want? Can they step over their corporate shadow and do the “right” thing? This weekend is the DNC’s Waterloo. Let’s hope that Wellington is phonetically closer to Ellison for good reason: a harbinger of sane political machinations. Then again, maybe there are just too many P’s in Napoleon Bonaparte and Perez is blessed by this onomatopoeic omen.