We all know the name, but what do we know of the man’s work beyond that ceiling that he painted? Michelangelo gets the treatment in this installment of Know Who You’re Googling.

There’s an old church not far from the Colosseum in Rome called San Pietro in Vincoli that houses one of the world’s greatest works of art – the mammoth marble statue of Moses sculpted by an artist so famous he’s known by first name only: Michelangelo.

The Moses is an imposing work. Standing over eight feet high, it was completed in 1515 by a sculptor at the height of his powers. Moses, prophet and lawgiver, is holding the Ten Commandments; he’s a figure of unquestioned authority. He’s old, but still strong, virile, and intelligent. Just look at the taut muscles in his arms, the veins in his hands, the straight shoulders, the powerful legs. His left leg is pulled back as if he’s about to get up, giving the effect of strength and energy. 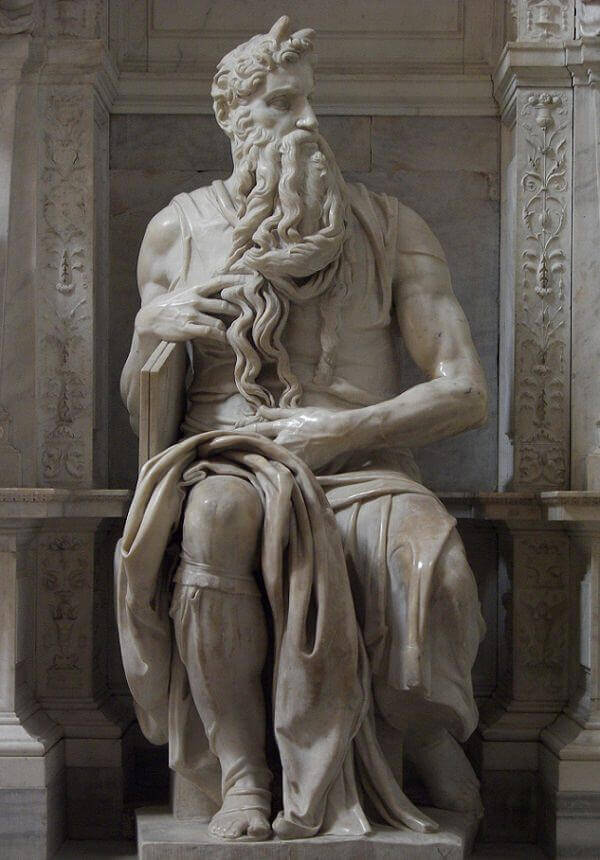 Moses sits in a contemplative pose, stroking his beard, but there’s such vitality in the work. The folds in the clothing, the curls in the beard, the face that gives meaning to the phrase “chiseled cheekbones.”

The horns are a bit of an oddity but are easily explained. The Hebrew word for “radiant” (Moses was radiant after receiving the Ten Commandments) was translated as “horns” and it was “horns” that made it into Latin versions of the Bible. (I daresay it’s a whole lot easier to sculpt horns than rays of light emanating from someone.)

The Moses sculpture was originally intended as part of the tomb of Pope Julius II. Julius wanted Florence’s most famous artist to design and build him a fabulous two-story, classically-inspired tomb so that his name too would live on. (These popes spared no expense on themselves; no vows of poverty going on here.) Michelangelo never finished the tomb because he simply became too busy.

Born in 1475, Michelangelo Buonarroti was apprenticed to artist Domenico Ghirlandaio at the age of 13. His talent was such that, a year later, he was sent to the art school in the palace of Florence’s ruler, Lorenzo de’ Medici. What a coup for a young boy. There he mixed with artists, poets, intellectuals and honed his own extraordinary skills. He also made a great study of the human body and even gained permission to examine cadavers so he could learn more about anatomy. That training certainly paid off.

He was 22 or 23 when he was commissioned to sculpt the Pietà. The dead body of Jesus is draped across his mother’s lap. Everything about the sculpture is incredibly realistic – the creases in Mary’s clothes, the knuckles on the fingers, the attitude of deep sorrow on Mary’s face, the naked torso of Jesus. The dynamism in the sculpture – over six and a half feet tall and carved from a single block of marble – stunned viewers and cemented his burgeoning reputation. 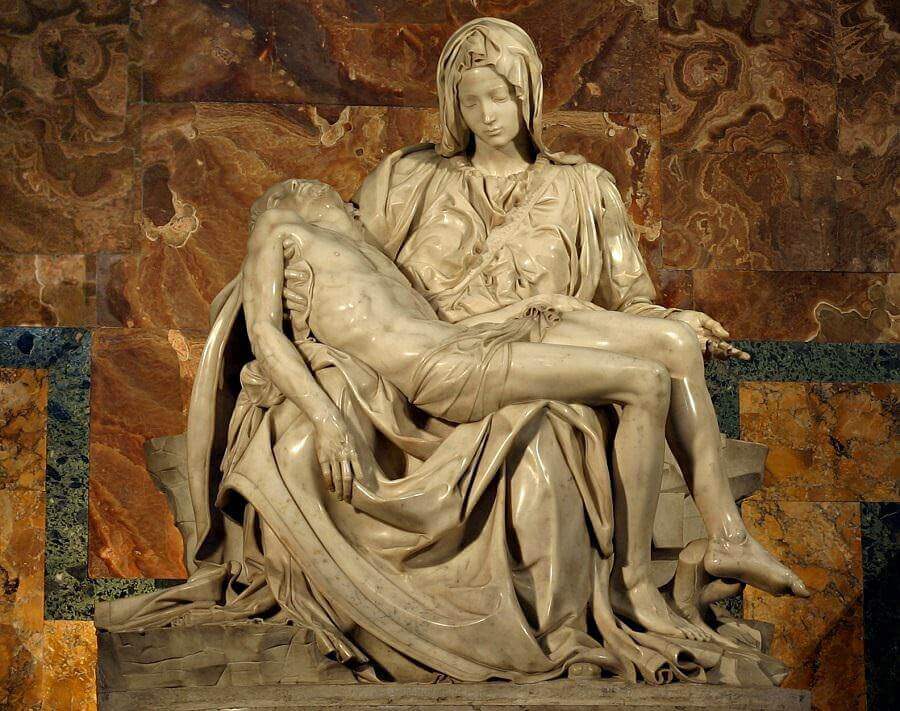 In 1501, Michelangelo was commissioned to create a statue of the biblical figure of David. Who hasn’t seen images of arguably the most famous statue in the world?

The sculptor chose to depict David before his battle with Goliath; he has rippling muscles, a handsome determined face, strong hands poised to use his slingshot. He’s powerful and courageous. Michelangelo’s hands brought the stone to life and he did this from a single piece of white Carrara marble. The statue is over sixteen feet high, weighs over six tons, and became a lasting symbol of the Florentine Republic.

It wasn’t long after David was completed that Michelangelo was summoned to Rome by Pope Julius II. As well as his tomb, he wanted Michelangelo to paint the ceiling of the Sistine Chapel. Michelangelo didn’t think of himself as a painter but took the commission and, over four years, created one of the world’s most iconic works, a fresco peopled with more than 300 figures across 5,300 square feet. Even 500 years later, it still has the power to awe visitors. 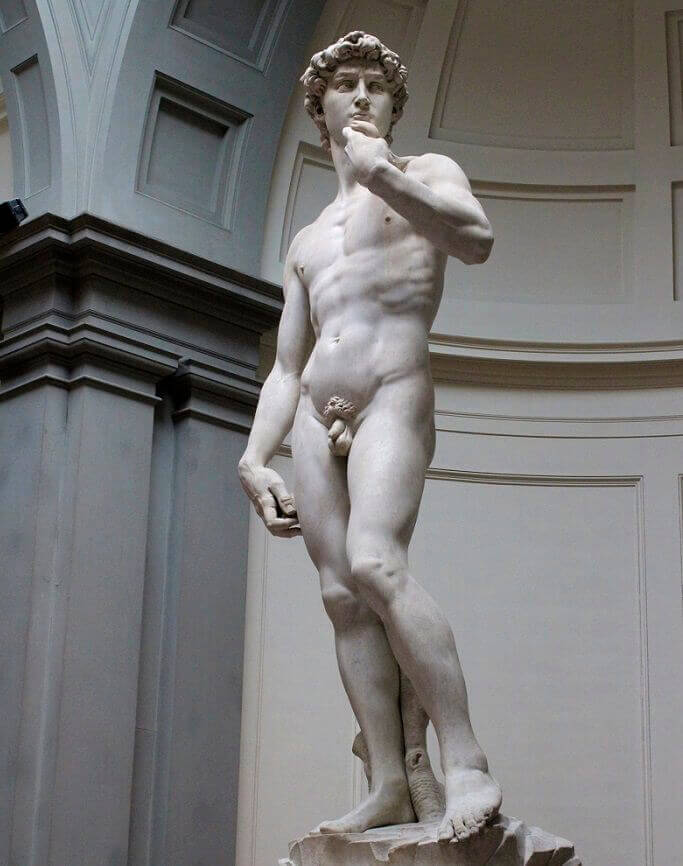 The Creation of Adam is one of many enduring portrayals in the Sistine Chapel. Adam is shown naked, a perfect picture of masculinity, waiting to have life and potency transmitted to him via God’s outstretched finger. This giving of a divine gift had an immense impact on its first viewers.

Michelangelo was the greatest living artist of his time. He was known as a moody man and was said to have been critical of his work, but his vision was quite spectacular. He believed that it was his vocation to find the figures within the marble: “Every block of stone has a statue inside it and it is the task of the sculptor to discover it.”

In his later years, he was an architect and designer responsible for, among other things, the Medici Chapel in Florence and the dome of St. Peter’s Basilica in Rome. He continued to paint, sculpt, and design to the end of his life.

Michelangelo’s personal life is not nearly as well known as his art – and that would probably suit him just fine. Many have speculated that his love of the naked male body meant he was homosexual and certainly some commentators have described his sexuality as a mix of Platonic and homoerotic.

He certainly wrote poems to a young man. (Poetry too? Michelangelo was a bottomless well of creativity!) He wrote about 300 poems, many addressed to Tommaso dei Cavalieri, although others are dedicated to popular female poet Vittoria Colonna. It doesn’t matter who he loved or even if he loved. For him, life and love were all about his art.

One of his poems ends with the lines:

“If I was made for art, from childhood given
A prey for burning beauty to devour,
I blame the mistress I was born to serve.”

Michelangelo died in 1564 at the age of 88, a grand age for the time. He was interred in the Basilica di Santa Croce in Florence.