We’ve been raised on the assumption that, if nothing else, Trump can close a deal. However, the leaked transcript of his infamous conversation with Malcolm Turnbull refutes that.

It was the slammed phone heard ’round the world.

The impact of Malcolm Turnbull and Donald Trump’s disastrous first date reverberated over the White House lawn, spreading itself across headlines and Twitter feeds, even affording the Prime Minister a fleeting sup of pop-culture relevance as he was lampooned by the genius of Saturday Night Live. Malcolm was a cuck, laugh at the cuck. He trembled at the feet of the mighty tangerine. His name’s Trumble. ROFLOL.

Yesterday, those who laughed, or believed that Turnbull capitulated, should quietly raise their hand in a “my bad” gesture, as The Washington Post released a transcript of the infamous phone call, painting things in a rather pale shade of awkward.

And, yes, Turnbull didn’t exactly color himself in the hue of Napoleonic glory, what with this reduction of people’s problems into an equation Donald didn’t need to solve, pushing shit uphill to ensure Australians didn’t lose theirs. But Turnbull’s a politician, he stuck to his policies, even if Australians don’t agree with them. From an objective standpoint, Turnbull was stoic, even keeled, and even lowered his tone, ratcheting up the hyperbole to fit his audience, especially the very Trump-sounding term “… the best person in the world … we will not let you in.”

However, there’s something else at play, something far more interesting. The throwing back of the curtain. Through a lifetime of knowing The Trump as a verb, or a thing, we’ve come to believe that there are two Thunderdomes one would be wise to not oppose him in. The court of law or the making of a deal. We’ve been raised to believe that he’s a great artisan with a fountain pen, a fact collectively held as gospel.

And yea from the peak of Trump Towers, he brandished’th a tablet, on it a downloaded copy of The Art of the Deal, rules to live by in matters of business, there shall be no god, but I.

Thy shall be yuge.

Well, sort of. While he might be the pussy-grabbin’ Muslim-bannin’ flag-wavin’ fake-tanned clusterfuck we love and disown, many neutrals (and voters) clung to the idea that he’d be able to, at the very least, argue his way to a wealth of favorable deals. The Washington Post leak reveals that the all-powerful Trump is a myth. The towering figure that held all the cards, hoarded all the chips, and who owned the casino, is dangerously close to the last days of Howard Hughes. He’s an entity trapped inside his gaudy establishment. A prisoner of it. He’s paranoid by the expanse of what lies around him, fearful of the microscopic evil entities creeping in every crevice, looking to pollute his pristine environment. He can’t stop it, leave, or move on. There’s too many.

There’s more. The whole phone call is hamstrung by Donald’s anecdotal rambling, replete with factoids sans context, abetted by a metric fudge ton of dropped names. It’s familiar to us because that’s the campaign Trump’s verve. Big on themes and crowd-pleasing truisms, light on diplomatic flexibility. It is what it is, because it is what it, because Stone Cold says so.

The problem is that there was no crowd and there is no alternate Trump. Who he is on Twitter or on the pulpit or behind closed doors is who he is. There’s seemingly nothing more. Which is something without peer. Even Donald’s ubermensch, Ronald Reagan, who was elected on a similar platform of warm themes and American self-love paired with vague threats of imminent danger from an alien force, was able to bench the rhetoric and entertain the idea of meaningful diplomacy with Mikhail Gorbachev, the emperor of his so-called “evil empire.”

I don’t see the possibility of that same dexterity from Trump. Throughout the Turnbull call, Trump emanated a substitute teacher vibe, thrust in a harsh environment with a sharp learning curve on zero notice, choosing to wing it while the class hurls oranges into the fan. Trump’s following a lesson plan he doesn’t understand, so he’s decided to talk a lot to make himself sound smart. The problem is that the students see through it, so he gets defensive, looking to overpower them with an authoritative tone. The kids smell fear. It’s game over. 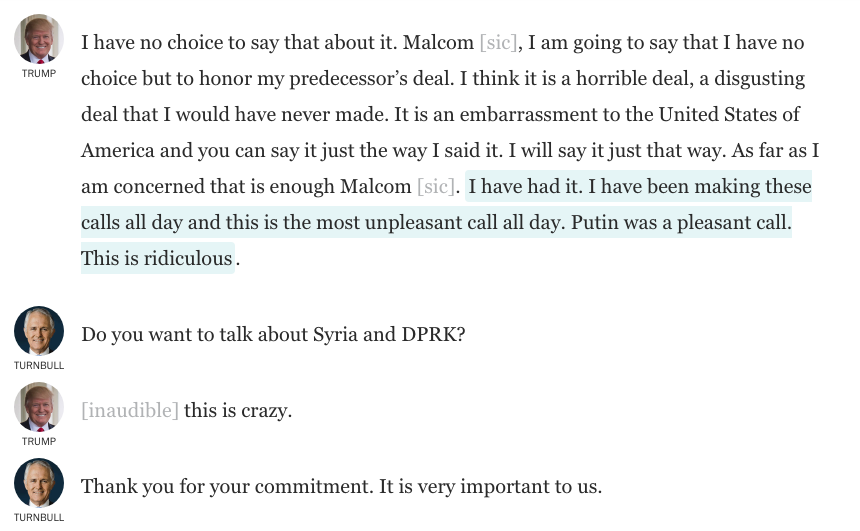 It’s not like Trump’s doing anything wrong, he’s just not very good. Actually, in a bent way, he’s doing exactly what he promised. To not become a politician. The problem is that he is one now and there’s a vast difference in being able to wring results from a bunch of yokels in Texas and a bunch of yokels in the capitol, or from another capital.

Perhaps the man should heed his own advice, as illustrated in The Art of the Deal:

“Leverage…don’t make deals without it.”