Alexander may have been the blueprint for the overachieving smug millennial of today. But what did he do that was so great?

“There are so many worlds and I have not yet conquered even one.” So said Alexander the Great, king and conqueror, and our man of the moment. His was a short but action-packed life.

Alexander the Great, one of the greatest military leaders of all time, was born in 356 BCE in Pella, ancient capital of Macedonia. His martial, tactical, and political skills were unmatched, allowing him to build one of the mightiest empires of the ancient world. That’s why his name lives on, millennia after his death.

Alexander was reported to be an unpleasant man, ambitious, quick to anger, and perhaps a little in awe of his own apparent divinity. His mother, Olympias of Epirus, was said to have slept with Zeus, king of the gods, and years later the Egyptian Oracle proclaimed Alexander Zeus’s son. From an early age, Alexander embraced this notion of being divine, attributing much of his success in life to his alleged heavenly paternity. You can get a lot done in the belief that you’re a god. Even these days there are vestiges of that style of thinking – consider the leader of North Korea; back in the ancient world it was a definite political plus to be associated with divinity.

Alexander’s father, Philip II of Macedon, was a great warrior who made sure to nurture his son’s fighting and horsemanship skills and who also recognized that education was key and thus appointed only the best tutors for him. One of those tutors was famed philosopher Aristotle who instructed the young prince in philosophy, literature, science, politics, even some medicine. The two continued to correspond for the rest of Alexander’s life.

The first inkling anyone had of Alexander’s determined character was when he was about 11 years old. A magnificent wild horse was presented to Philip. No one could get near it, but the boy tamed it, claiming it as his own, prompting Philip to remark (according to the ancient historian Plutarch) that Macedonia would be too small a kingdom for his son. Alexander named his horse Bucephalus and together they fought in every one of his battles. And battles there were many!

It was never his way to impose bans on local religions or customs; he wanted “converts” but he recognized people would be more amenable if they weren’t compelled to give up traditional belief systems.

At the age of just 16, and while in charge of the country in his father’s absence, Alexander led a contingent against an invading tribe from Thrace, quickly defeating them and earning the right to lead a bigger force at the 338 BCE Battle of Chaeronea. That battle resulted in the Greek city-states becoming united under Macedonian rule, and when Philip was assassinated two years later, Alexander took the throne, on the strength of his recent military successes. He ruthlessly eliminated his political rivals and potential traitors, and using an approach of strategic military brilliance and diplomacy, planned his next moves to consolidate and expand his empire.

Having secured Greece, Alexander set his sights further afield and led his armies to take on the might of the Persian Empire. A popular story of the time was that of the Gordian knot: legend said that the man who could untie it would rule the world. Alexander didn’t pussyfoot around – he simply sliced through it with his sword. Nothing was going to get in his way. Moving east towards and then beyond modern-day Turkey, Alexander began a war against the Persians, led by Darius III. A number of battles resulted in Macedonian victories, and by 331 BCE, when Alexander was still only in his mid-twenties, he trounced Darius at Gaugamela and declared himself Persia’s new king. Coins dating from 330 BCE call him “king of Asia.” 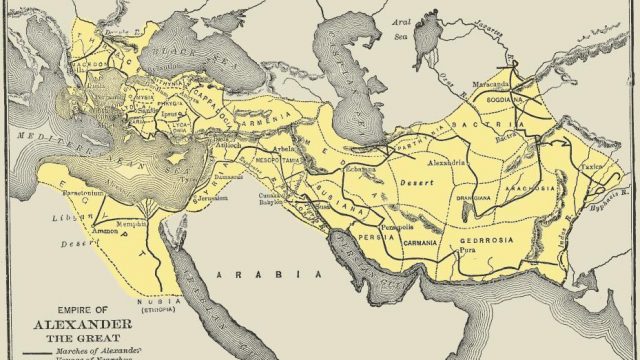 Now, while he was conquering, he was also trying to win over his new subjects. To consolidate his vast empire, Alexander had appointed trusted officials, many Persians among them, to oversee his territories. It was never his way to impose bans on local religions or customs; he wanted willing “converts” to the Macedonian way, but he recognized that people would be more amenable if they weren’t compelled to give up their traditional belief systems. This didn’t stop him from quelling unrest or executing those who openly defied him, but it was an effective method for conquering. Winning hearts and minds, as Americans might say.

In addition, he made his officers marry women from the Persian aristocracy so that ultimately Macedonians and Persians would be a united people. Sounds like a good idea, but what happened was that many Macedonians were angry about the new arrangements, not much liking the notion of assimilation. (Sad how some things never change!) There were plans aplenty to assassinate Alexander but these were rapidly quashed and the men involved summarily executed, Alexander’s quick temper preventing any chance of mercy.

Traitors taken care of, Alexander set off on further expeditions taking on Syria and Phoenicia, then Egypt where he established the city of Alexandria in 331 BCE. He now controlled the entire eastern coast of the Mediterranean.

His next big expedition was into Mesopotamia. He occupied Babylon, then pushed ever east towards India. He won a great battle at the city of Hydaspes (in modern-day Pakistan) in 326 BCE, but was devastated when his noble steed was mortally wounded there. Alexander founded the city of Bucephalia in honor of his long-time battle companion.

It was in India that his men decided to take a stand. Morale was low. Far from home and tired of conquest, they mutinied. Alexander had no choice but to turn back towards Babylon. And it was in Babylon in June 323 BCE aged 32 that Alexander died. The cause was probably malaria, but various alternative causes have been suggested, including food poisoning, assassination, and even alcoholism.

Over almost 13 years, Alexander had built a massive empire extending from Egypt all the way east to the Indus River, founding new cities and spreading Hellenic culture and the Greek language and philosophies across Asia. His personal shortcomings notwithstanding, he was an exceptional military commander, acting quickly to quell problems and adapting strategies and weaponry to suit any given situation. He maintained a strong financial policy, closely monitoring output from Macedonian gold and silver mines, collecting taxes from across his empire and establishing a new monetary system.

His personal brand of dynamism died with him and after his death, Alexander’s once great empire came to an end – yet he remains one of the most magnetic figures of the ancient world.