The Donald Trump tweet is synonymous with the insanity of 2017. However, one study has charted the true evolution of his online insanity.

The growth of an artist is an amazing thing to witness, especially when you unfairly compare their more complex works to the simplified pop-bubblegum-rubbish they caught our attention with. Think of The Beatles just wanting to hold your hand, then later putting a tab of acid in it because the Maharishi told them to. As it goes for Paul, so it goes for Donald as the current President, and don’t @ me here, but our greatest living linguist has seen his own work grow, shriek, and develop horns alongside a nasty habit of soiling the rug.

Be sure to tune in and watch Donald Trump on Late Night with David Letterman as he presents the Top Ten List tonight!

A simple four noun progression. A harmless, easy to listen to earwig. Everybody wins.

Compare it to his later work, and the difference is staggering.

The Tax Cuts are so large and so meaningful, and yet the Fake News is working overtime to follow the lead of their friends, the defeated Dems, and only demean. This is truly a case where the results will speak for themselves, starting very soon. Jobs, Jobs, Jobs!

However, let us push a bit deeper and chart the body of his work. Two fellow linguists decided to cast the 36,000 tweets Donald has carved into a statistical model to see if the language the man has mangled has changed. The study uses a linguistic trick called “multidimensional analysis.” This can find the characteristics that account for the biggest differences in Trump’s feed. The linguists, Jack Grieve and Isobelle Clarke at the University of Birmingham in the UK, then looked at tweets that scored highest on each characteristic and interpreted each as a kind of style or tone.

In other words, gird your loins for graphs.

The study measured two types of tweets: promotional and critical.

Governor @Mike_Pence and I will be in Cleveland, Ohio tomorrow night at 7pm – join us! #MAGA
Tickets: https://t.co/hre7FofPxQ pic.twitter.com/5lhrb7POGl

N.Y. City is paying FORTY MILLION DOLLARS to five men that many think are guilty as hell. So many facts – should have been trial. Politics!

Applied to the chart, and consider the above the line value reflective on the amount, and the path of Trump’s promotional tweets crest in the lead up to his declaration, and ultimately coronation as America’s king: 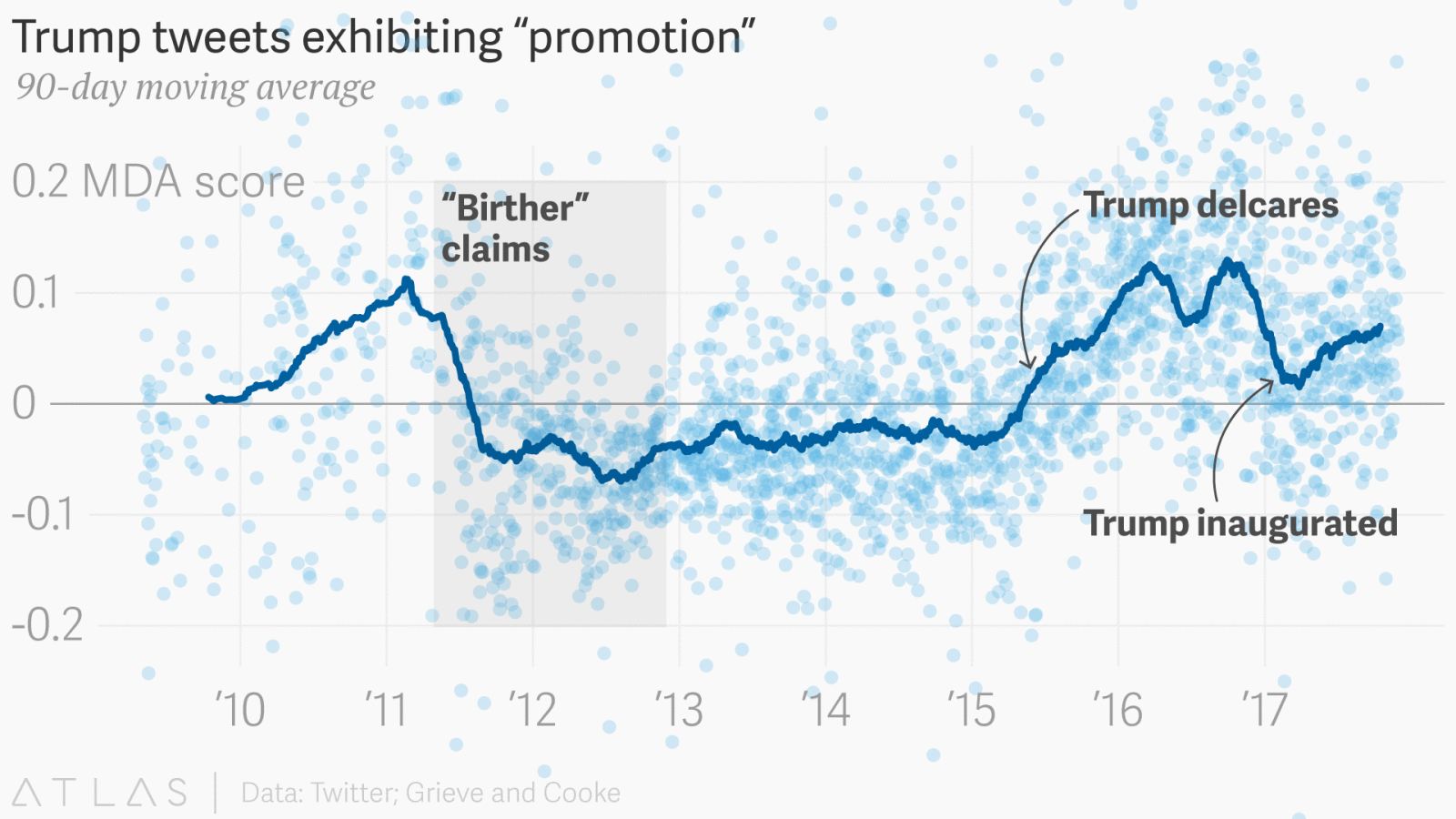 Typically, his level of criticism follows the above events: 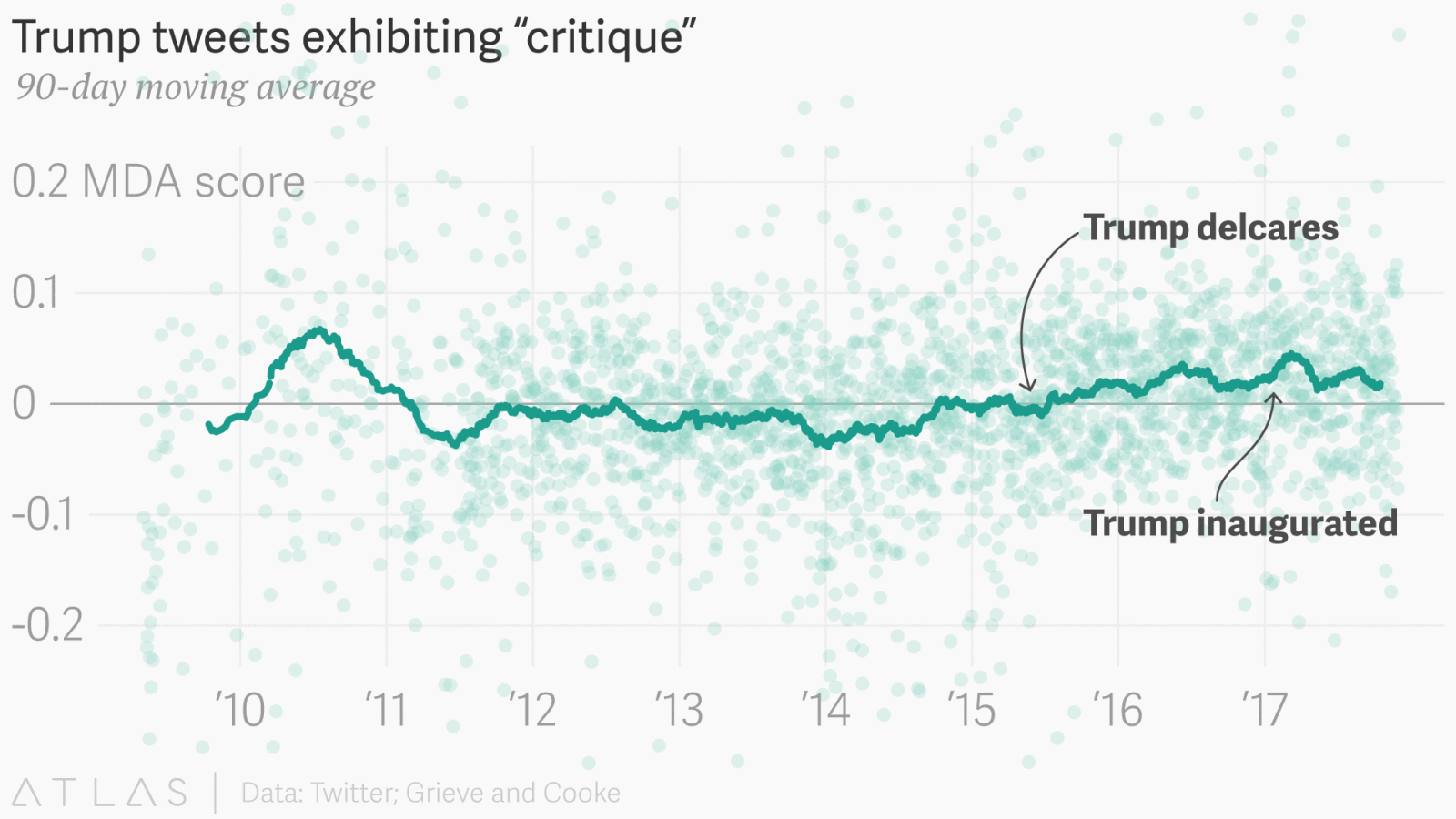 The bump in chart B represents Donald’s birth in the political consciousness when he pushed for then-Prez Barack Obama to publish his birth certificate. Consider it then the point where the brake lines were cut. From there Donald’s tweets moved exclusively from pop-culture dreck to political dreck. Grieve and Cooke also added a meta measurement in their algorithms, one of “opinion” where, well, Donald said how he felt and how often he felt it. 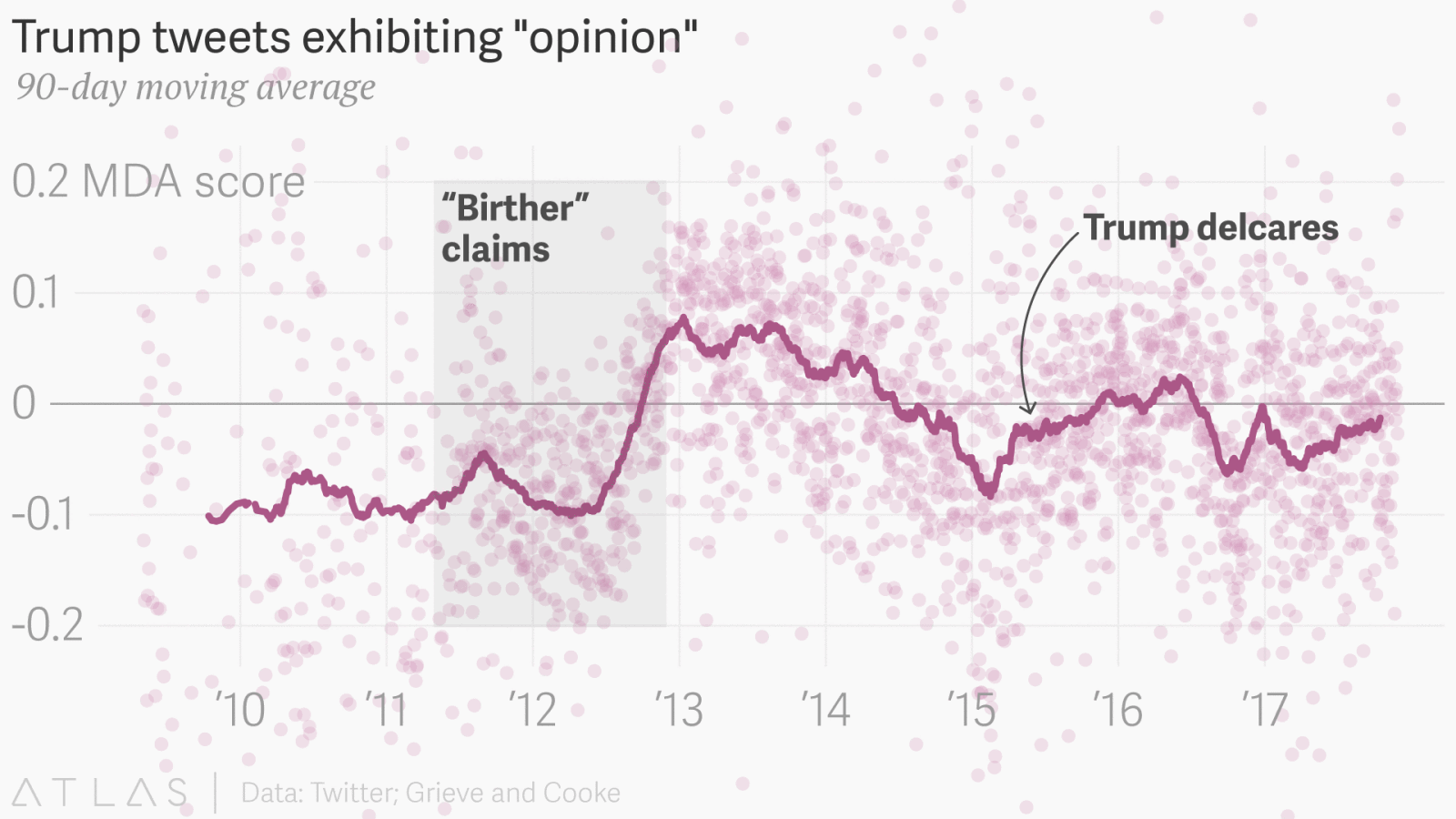 To analyze the findings on a basic level, it represents the contours of the mountain of doody that man has built. In fact, the authors of the data are looking to push it further in order to analyze who actually authored the tweets at what time.

However, doing that presents the same problem as the Shakespeare disputation. I mean, who cares who actually wrote it? It’s just inaccessible esoteric rubbish elevated by the moronic, so just enjoy/revile it on the most basic level, by avoiding it at every opportunity.

That being said, Donald, I like your old stuff better than your new stuff.