When we were growing up, we were told many things about the food we were eating. As is turns out, most of those were lies. Thanks, Mom.

When I was growing up, the hours before dinner time were punctuated by a series of threats; in that, if I ate x, y would happen, and what I need is more doses of z.

However, as an adult, I’ve done my research and, as it turns out, what we were told as children were lies, damned lies. So, in no particular order, here are ten pieces of homespun truth that are pure truism.

Myth #1: Breakfast is the most important meal of the day.

Despite the fact that cereal empires love to cling to the idea, it’s pure fiction.

“Many — if not most — studies demonstrating that breakfast eaters are healthier and manage weight better than non-breakfast eaters were sponsored by Kellogg or other breakfast cereal companies whose businesses depend on people believing that breakfast means ready-to-eat cereal,” the suitably-named nutrition expert Marion Nestle wrote on her Food Politics blog in 2015 about this topic, stating that “independently-funded studies tend to show that any eating pattern can promote health if it provides vegetables and fruits, balances calories, and does not include much junk food.”

Nestle keeps her own breakfast advice short and sweet: “If you wake up starving, by all means, eat an early breakfast. If not, eat when you are hungry and don’t worry about it.”

With that being said, studies oft-suggest that skipping breakfast means death, but PT Max Lowery recently told Business Insider that “people who are more health-conscious overall tend to eat breakfast because they are following health guidelines,” Lowery pointed out, “whereas people who skip breakfast are usually unhealthier overall because they are ignoring guidelines.”

Tony the Tiger, why must you lie?

Scientists peeked at the health records of almost 14,000 Americans and surmised that the 350 grams of juice they drank per day equated to a 24% higher risk of death.

“It’s basically sugar and water, and no protein or fat to counteract that metabolism,” Jean Welsh, a nutrition professor at Emory University, previously told Business Insider.

While we’re on the topic, smoothies are not a health food either. So …

While snacking can be an okay habit, as it apparently keeps us from overeating at meals, but research considering that the readily available snack foods aren’t very good for us, since they are often ultra-processed and high in sugar, so are linked with weight gain and more cancer cases. But, good lord, they’re tasty … until you finish it, and then you hate yourself. Nevertheless, “when you eat real, wholesome, healthy foods, you feel full sooner,” Ocean Robbins, grandson of ice cream magnate Irvine Robbins (a Baskin-Robbins co-founder) recently told Business Insider. “Your body feels nourished. You actually have the nutrients you need and in time you can have fewer cravings.”

Myth #4: You should replace your electrolytes after a workout.

It’s an important part of the zeitgeist. After one pumps iron, one must digest fluorescent energy drinks to replace what you’ve taken out.

Turns out, no. They don’t do anything special for your body.

“Athletes who lose the most body mass during marathons, ultramarathons, and Ironman triathlons are usually the most successful, which suggests that fluid losses are not as tightly linked to performance as sports drink makers claim,” science journalist Christie Aschwanden writes in her 2019 book, Good to Go: What the Athlete in All of Us Can Learn from the Strange Science of Recovery.

Aschwanden explains that your brain is perfectly capable of regulating electrolytes like salt in the body on its own.

“You need enough fluid and electrolytes in your blood for your cells to function properly, and this balance is tightly regulated by a feedback loop,” she said.

Myth #5: You should kneel at the might of the food pyramid.

One could argue that this pyramid is far more visited, and far more familiar, than their bricky cousins at Giza. 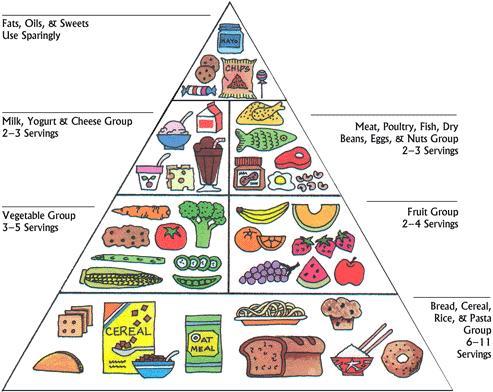 It was built back in 1992, one formed on the promise that if you follow it religiously, you will avoid the sarcophagus. This strategy pushes on to load up on carbs, eat ample servings of fruits and vegetables, and round out one’s diet with some dairy and protein. Seems fairly legit, right?

Nope. Study after study indicates that this strategy does not suit all. As different bodies respond differently to ingested fats and carbohydrates, so one person’s stable energy source is another’s crash.

Nutrition experts do believe that everyone can benefit from eating more unprocessed foods, like leafy greens, seafood, nuts, and brown rice, while cutting out the processed white starches located on the lower rung of the pyramid. The question now is who owns white bread, and who placed it in the pyramid in the first place?

Myth #6: Margarine is better than butter.

The 1990s was a weird time of fads and nonsense. Denim, Billy Ray Cyrus, Boy Bands. However, above them all is margarine, the hellspawn of palm, canola, and soybean, marketed as a healthier alternative to the buttered toast of our parents.

Margarine, however, included trans fat. Harvard estimated that the gaudy days of margarine led to roughly 50,000 preventable deaths every year in the United States. The FDA rolled out a near-universal ban on artificial trans fats in 2018.

However, these alternatives are often highly processed (and vegetable oils that are lab-heated to prevent spoilage) are reckless drivers of disease. A key ingredient in margarine is palm oil, which is not nearly as good for our hearts as monounsaturated fats (like olive oil) is.

Myth #7: You should lay off the carbs.

Lies, all lies. If we are to opt for quinoa, bananas, apples, beans, and carrots, go for your life. There are studies that will back you up, as people who eat a wide variety of these foods, in addition to whole grains, tend to have trimmer waistlines and lower blood pressure levels.

Further, we should avoid those pesky refined carbs, which are present in white bread.

There isn’t any compelling evidence that salt on its own raises blood pressure or contributes to more problems of the heart. Per Business Insider, “… it may be the case that people who eat a lot of salt are at risk of developing health problems for a host of other reasons, mostly because their diets and lifestyles are less healthy overall. For example, salt is a great preservative, which means there is a lot of it in processed food, which we know is not good for us.”

For many moons, researchers have looked to find the ways that coffee harms our health. Overwhelmingly, they’ve failed.

A mountain of scientific material suggests that drinking coffee can extend our lifespan. The best examples stem from two giant studies: one of more than 400,000 people in the United States and the other of more than 500,000 Europeans. Both studies found that regular coffee drinkers were less likely to die from any cause than people who don’t sip a daily cup of joe.

Further research suggests that drinking somewhere around four cups of coffee per day may be the best dose for cardiovascular agility.

Got milk? Got fucking lies, more like. The phrase was nothing more than advertising drummed up by the California Milk Processor Board to fight declining milk sales.

Despite the milk upon our lip, it does little for our bones behind it. Yes, dairy offers a dose of calcium (which we need), but we also require help from Vitamins D and K. More to that point, milk drinkers do not appear to be any less susceptible to bone injuries.