Puns. They’re not hurting anyone, right? Wrong. Radical pundamentalist joke killers are on the rise, and you could be next.

Do yourself a favor. Sneak a peek over your shoulder. Familiarize yourself with the exit points. Take note of the features of those who sit around you – but avoid eye contact at all costs. Why, you ask? Safety. They’re already here. Pundamentalist Terrorist Organizations have invaded our nation’s small talk, phone calls, and even the cherished family dinner table – and you may be next.

A pundamentalist by definition is someone who believes the pun is the only form of comedy. A person who, indoctrinated by the learnings of pundamentalism, is prepared to prove this point at any cost. They care not for their victims, stomping upon last nerves, feasting upon the sound of clicked tongues, or enabling corneal damage done by excessive rolling of the eyes.

The power of these pundamentalist conversation killers should not be underestimated. Any member of your family, classmates, coworkers, or friends can be a pundamentalist. Make sure you put yourself on your watch list.

Suspect everyone, tell no one.

The ease of concealment makes a pundamentalist hard to spot – until they act on their destructive credo, which they are sure to do, usually in a public place to wreak the maximal damage.

The pundamentalists seek indoctrination. Through the usage of glossy internet-based propaganda (example below) they seek control of the tired, the lazy, and the drunk. 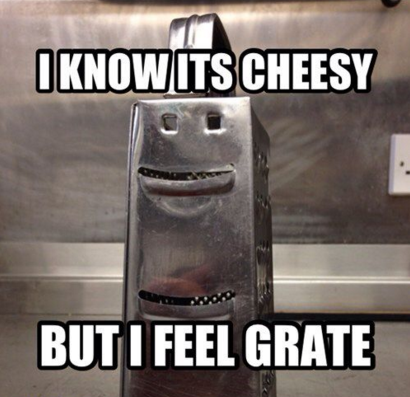 (A vicious example of pundamentalist propaganda.)

Their main tool is the “meme.” A weapon so simple that even the youngest and thickest of children can detonate them on impulse. Pundamentalists do not discriminate. They actively seek those turned away from the world of mainstream humor. These faceless pundamentalist organizations even promote the use of certain websites (or “meme factories”) where followers are encouraged to create their own memes or IMD’s (Improvised Mirth Devices), thereby creating an unlimited cache of weapons. This, in itself, is part of the problem, for without strict control of what constitutes a joke and what does not, the world of comedy as we know it is under extreme threat.

How to Deal With Pundamentalist Infiltration in Your Own Family

If you suspect someone you love has been brainwashed by pundamentalist propaganda, follow these steps:

Above all, know that the pundamentalist seeks destruction. For them there is one true joke, and all else is the sea. So, do not question their values, but allow them to question their values. Ignorance is the key. Show no reaction. For the more you show disgust toward their LOL-y War, the destruction of thousandfold innocent conversation is imminent.