Even 100 years ago, the movies were about more than just entertainment, with directors challenging social mores and uninformed opinions.

One hundred years ago, a bumper crop of movies hit screens right across the world. From comedies to romance and adventure, audiences flocked to see the latest cinematic offerings.

Among the big Hollywood stars were Mary Pickford, Douglas Fairbanks Jr., Charlie Chaplin, Buster Keaton, Lillian Gish, and Rudolph Valentino. Comedy and romance were possibly the biggest drawcards for audiences, but there were also a number of films that addressed very controversial social issues of the day. Let’s have a look at some.

In 1919, the pioneering French director and producer Abel Gance released J’accuse, set in 1914 and starring Romuald Joubé as Jean, a poet who loves Edith even though she’s married to the jealous François, played by Séverin-Mars.

The men, however, become friends when they are assigned to the same army unit and fight together in the trenches. The film addresses the horrors of war, not only the fierce battles, but the post-traumatic stress and the rape of women – Edith is raped by German soldiers and bears an illegitimate daughter.

When the men return from war years later, they are confronted by the child’s existence and return to battle where François is killed and Jean loses his mind.

With its unapologetic anti-war message, this technical and cinematographic tour de force made a powerful impression on audiences, many of whom had lost friends and family during the conflict. The scene where dead soldiers rise from the battlefields was revolutionary for the time.

At a time when pacifism wasn’t favorably looked on, Gance openly questioned the pointless deaths of millions of people during World War I.

Different from the Others

A century ago, in Germany, homosexuality was a crime, as it was in most countries, so it was brave of director Richard Oswald to tackle the subject in his film Anders als die Andern (Different from the Others) starring Conrad Veidt as Paul, a successful concert violinist who falls in love with one of his male students, played by Fritz Schulz.

Paul grapples with his sexuality and at his family’s urging, goes to see a doctor about his “condition.” The doctor was played by Magnus Hirschfeld (who also co-wrote the film with Oswald), a real-life physician who championed greater sexual freedom in society and established the Institute for Sexual Science in Berlin in 1919.

He tells Paul that love for someone of the same sex is just as worthy and noble as love between a man and a woman.

It perhaps comes across as a little preachy today, but questioning the status quo so openly was quite radical, especially considering that the medium of film was relatively new.

A blackmailer – a former lover – threatens to expose Paul, thus ruining his career and that of his budding student, and the case ends up in a courtroom. Although the judge is understanding of Paul’s situation, the scandal, unfortunately, becomes public knowledge and Paul commits suicide.

Different from the Others may well be the first pro-gay movie ever made. The homosexual characters are portrayed sympathetically, without a hint of mockery or judgment, and the film is an unashamed plea for the government to repeal the laws making homosexuality a criminal offense.

The British silent film Damaged Goods, also made in 1919 and directed by Alexander Butler, tackles the taboo subject of sexually transmitted infections.

The plot revolves around a doctor who supposedly cures his patient of venereal disease, but when the patient later gives birth to a baby, the child carries the infection. It was a scandalous topic for a film, invoked the ire of the censors, and didn’t fare well at the box office.

In Hollywood, writer, director, and producer D.W. Griffith – famous for Birth of a Nation (1915), possibly the first epic historically-based movie ever made – released a film called Broken Blossoms. It featured two of the biggest movie stars of the day: Lillian Gish and Richard Barthelmess. A real tearjerker, it was a huge box office success and is still regarded as one of Griffiths’s greatest cinematic achievements.

Gish played Lucy, the only child of an abusive alcoholic father (Donald Crisp), who meets a kind Chinese man, Cheng (played by the very white Barthelmess), who offers her sanctuary and falls in love with her. Although they never kiss, or even touch one another, Broken Blossoms was perhaps the first interracial love story shown on a movie screen. 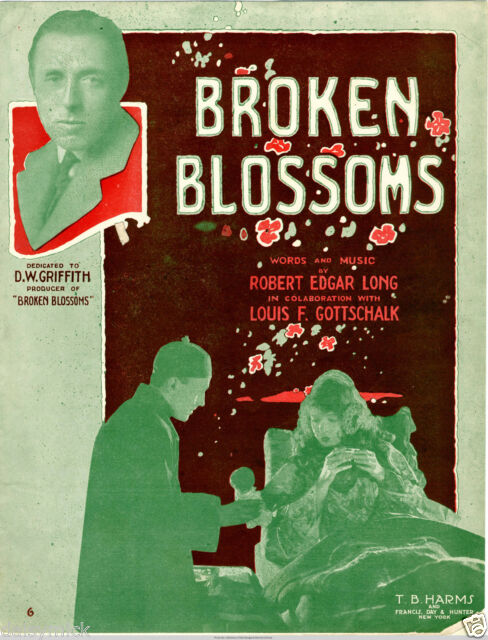 Marriage between races was a crime in 1919 and America, like much of the Western world, was hugely xenophobic. The fear of the so-called “Yellow Peril” went on for decades, so there was no chance the pair would find happiness. Quite the opposite – it’s a tragedy after all. Yet the film went some way towards breaking down some social barriers.

The critic Roger Ebert commented in 2000 that, in spite of its simple plot, movies like Broken Blossoms played a part in promoting racial tolerance.

Movies like these challenged people to think about some real social issues of the time and, even a century after their release, these films still provoke detailed discussion. It shows just how powerful good storytellers can be.